Carlson .09 Rail Mite
Designed and built by John Carlson
In addition to designing and building a number of different  .19- and .29-size tether racers, and prior to his successful collaboration with Red Davis to produce the Davis-Carlson Mites, Chicago's John Carlson produced a small number of mite cars built specifically for rail track racing.
In several cases, Carlson simply modified his successful tether car pans by adding rail guide mounts to the patterns.  But his .09 size rail mite pattern is unique (shown third from the top in lower right photo) and no equivalent tether car version of this pan is known to exist.  Even so, the designs of the rail guide mounts cast into the side of the .09-size rail pans are identical to those cast into the sides of his .29-size rail pans.
The red car shown at the top of the photos was John Carlson's personal McCoy .09 powered car.  The hand carved wood top is an example of  Carlson's "signature" design.
The cream colored #21 Carlson .09 Rail Mite (lower left photo) is also McCoy .09 powered and was originally owned by Armand Beloian, a successful Buick automobile salesman in the Chicago area.
Both of these cars raced on the indoor rail track owned by the Chicago Mite Car Club for which Carlson served as president.  The track was located in the basement of the Calumet Park field house, where it shared space with a local kennel club. 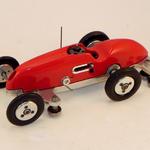 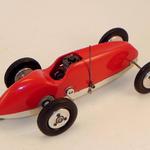 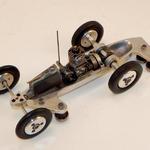 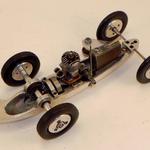 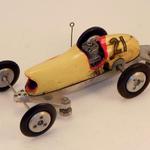 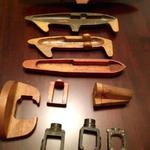