Babcock Rail-Mite
Designed and built by John Babcock
John Babcock was an innovative and highly successful gas powered miniature race car builder and competitor from the San Francisco area.  John built and raced both tether cars and rail cars and was one of the guiding forces behind the construction of a 4-rail, 1/12th mile rail track located in San Jose, CA.  Finished in 1949, the track was touted as the "world's fastest rail track" and hosted the International Model Race Car Association (IMRCA) Rail Nationals held later that year.
Following the success of that event, the San Jose track was awarded the first IMRCA Mite Rail National Championships to be held the following year on July 16, 1950.  Interest in racing mite cars was on the rise at that time, and it was rumored that rail mites were being built by a number of noted car builders, including Ray Snow, Al Papina, Dick McCoy and others, specifically for this event.
Not to be left behind, John Babcock designed a rail mite with an eye toward winning the inaugural Mite Rail Nationals.  The Babcock car was built specifically for the .19-class and featured a low-slung, streamlined two-piece cast aluminum body with a lay-down engine mount and spur gear drive.  The car was introduced in the Spring of 1950 and was available from Babcock in kit form less engine, wheels, tires and fuel tank for $12.00.  The car was also offered as a finished car, complete with a McCoy .19 engine and ready to race for $47.50.
The Babcock Rail Mites were not only attractive, they were also fast.  On May 7, 1950 Rudy Forrest set an IMRCA record of 79.64 mph for the .19-class  with his McCoy .19 powered Babcock Rail Mite racing on the San Jose rail track.
​The red #3 Babcock Rail-Mite shown in the photos was originally owned by Bob Diekmann of Algona, IA.  Diekmann's car was not built from a kit, but rather was purchased from John Babcock as a completed car and was entered in the 1950 Mite Rail Nationals in Diekmann's name by Babcock's close friend, Curly Glover.
While a Babcock Rail-Mite did not win the 1950 Mite Rail Nationals, Glover proxied Diekmann's car to a 3rd place finish in the event.  When he returned the car to Diekmann after the event, Glover enclosed a letter indicating that the car " ... had the event cinched" until the screws securing the front cover of the McCoy .19 crankcase came loose on the next-to-last lap of the final heat race, slowing the car and relegating it to a 3rd place finish.  Following that event, the car never raced again. 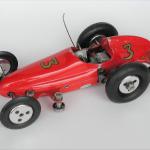 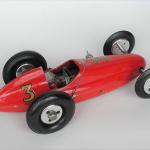 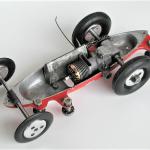 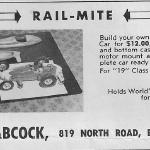 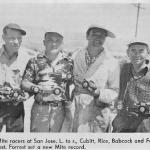 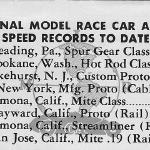 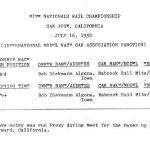 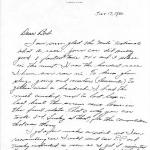