Babcock prototype
Designed, built and raced by John Babcock
Legend has it that this car was an early prototype of the Babcock Rail Mite that ultimately became so successful as a mite sized rail racer.  John Babcock is believed to have built this car to test an early design for a McCoy .19 powered spur-gear drive rail mite.  Steel rail guide mounts were bolted to a cast aluminum pan and a rather crude engine mount and drive unit was fabricated.
However, an early test run proved unsuccessful as the car experienced excessive vibration and would not run smoothly.  In an apparent fit of anger, Babcock is supposed to have yanked the car off the track, threw it into the grass surrounding the track, and walked away in disgust saying that he never wanted to see the car again.
But Babcock's close friend, Curly Glover, retrieved the car and kept it in his personal collection until the early 1990's when the car re-surfaced.
The original prototype did not yet have a top fitted to it, and the wood top shown in the photos is a recent addition to the car.  But, the rest of the car is just as it was purported to have been built by Babcock, and then subsequently abandoned along side the track where its performance was considered unacceptable. 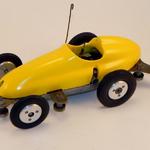 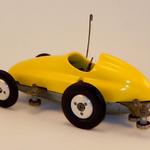 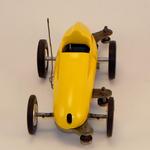 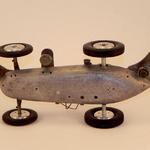 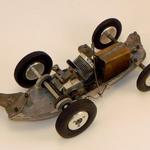 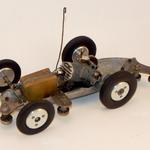