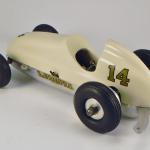 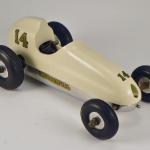 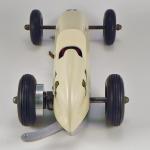 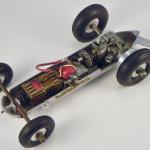 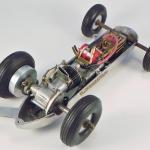 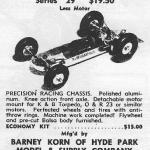 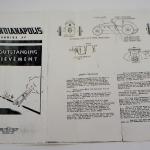 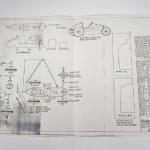 B. B. “Barney” Korn worked for several of the major film studios in Hollywood during his career making detailed scale models for movie classics like “Hell’s Angels” and “Moby Dick”. While working at Universal Studios, he built a number of miniature race cars powered by compressed air which appeared in crash scenes in several different movies. But arguably the best known miniature race cars which Barney Korn produced were his Meteor and Indianapolis gas powered miniature race cars. Not surprisingly, those cars were beautifully built and are treasured by collectors today.
But equally rare are the smaller Indianapolis Series 29 cars which Barney produced in kit form. The Series 29 car was designed in early 1948 and was introduced with little fanfare shortly afterward. The car was designed to be powered by a .29 cubic inch engine which qualified it for competition in the AMRCA Class A for cars with engine displacements of .36 cubic inches or less.
The Series 29 kit included a polished cast aluminum pan, Veco wheels and tires, a rough finished pre-cut block of balsa wood for the body, the front axle, a flywheel, all of the other bits and pieces of hardware needed to complete the car, plus a set of detailed assembly drawings and parts list…all for a price of $19.50 less engine. An “economy kit” was also available at a price of $15.00.
It is believed that only 50 of the Series 29 kits were produced and very few were sold. Fewer still were actually completed and entered in tether car competition. For whatever reason, the car did not sell in great numbers and did not enjoy success on American tether car tracks. As a result, finding one of these cars today, much less a completed example, is quite rare.
While most Series 29 cars which were eventually built were powered by glow engines, the car shown in the photos is powered by a .29 cubic inch K&B Torpedo spark ignition engine.