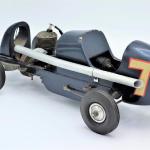 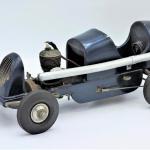 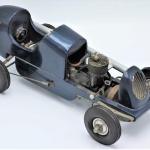 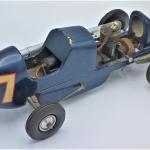 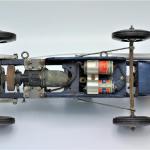 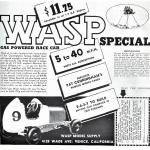 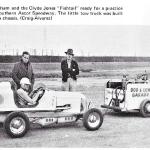 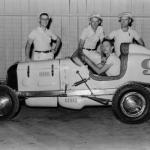 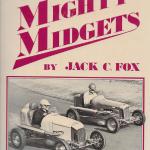 The pre-war gas powered miniature race car shown in the photos is a Wasp Special, which was introduced in 1938. The car was designed by Ernest Webb with assistance from the legendary Bill Atwood. The car could be purchased only in kit form for $11.75 without an engine, or with an Atwood Phantom engine for $19.50. The example shown is powered by a .299 cubic inch Hi-Speed ‘Torpedo’ spark ignition engine. Both the car and the engine were produced by Bill Atwood’s company, the Wasp Model Supply Co. of Venice, CA.
The Wasp Special could be built with either friction drive or gear drive. This example has gear drive powering the front axle.
The design of the Wasp Special was based on that of the Clyde Jones Offy midget driven by Pat Cunningham at the Gilmore Stadium track during the 1938 season. The Clyde Jones midget was built by Clyde Adams and was the first midget race car to be fitted with a body which incorporated a head rest in the tail. As a result of its uniquely styled body, the car was nicknamed the “Fishtail”, and was one of the most significant midget race cars of the pre-war era.
Even though the plans which accompanied the Wasp Special kit included provision of a head rest, arguably the most distinguishing feature of the car upon which it was based, the builder of this particular example elected to not include it when he finished the car.