Midget Monsoon
The Midget Monsoon was introduced in 1940 as being a Class A tether  car.  Available only as a partially finished kit, the car sold for $7.00 less engine and flywheel.
Included in the kit were the cast dur-aluminum chassis and grille, a partially finished balsa wood body, wheels and tires, and "plenty of Nu-Tone Dope" to finish the body.  All of the cast dur-aluminum parts were drilled and polished.
The example shown in the photos is powered by an Ohlsson .23 side port spark ignition engine with friction drive powering the front axle.  The car is complete with an ignition coil, condenser, and a wet cell battery mounted in the tail behind the seat.  The model aircraft wheels have soft sponge rubber tires mounted on wood hubs.  The rear axle is suspended using a transverse leaf spring and radius rods made from bicycle spokes.
Little documentation about the car has been found, other than the original advertisement and a pair of photos (without captions) from the May 1941 issue of "Mechanix Illustrated" magazine.  The magazine article notes that all of the cars in the photos were provided by Polk's Model Craft, Inc., a large hobby shop in New York City. 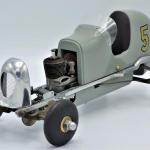 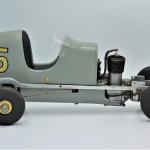 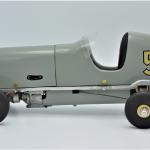 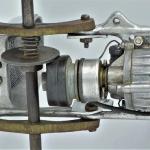 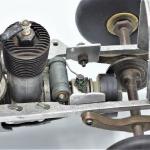 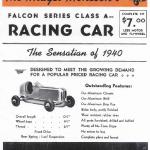 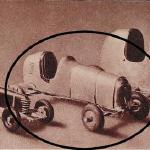 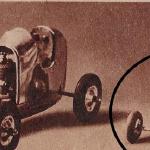 Powered by an Ohlsson .23 spark ignition engine with friction drive