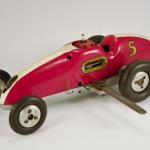 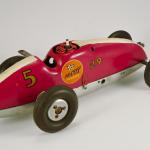 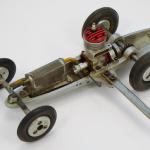 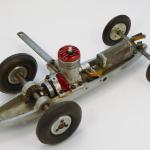 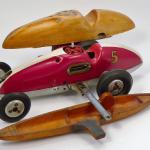 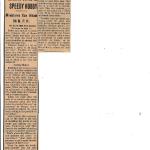 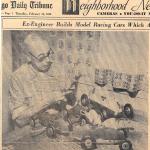 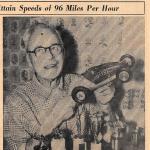 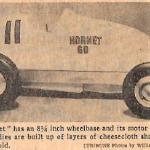 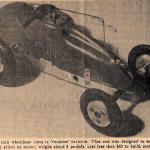 This McCoy .29 powered example of a Yonaites Mite was produced by Constantine "Gus" Yonaites of Homewood, IL.  Yonaites raced the car before selling it to another well-known midwest tether car racer, Felix Kunke of Chicago, IL.
Gus Yonaites was a member of the Chicago Mite Car Club whose members raced their tether cars on Friday nights on the portable tether car track inside the Calumet Park fieldhouse as well as on NMRCA-sanctioned 1/80th mile mite car tracks in the midwest.  Yonaites was employed as an electrical engineer with American Can Company, but after finding a year of retirement to be too dull, he went back to work as a technician at the Olson Shipyards in Riverdale.
Gus Yonaites designed and built his own cars, hand-carving the patterns for the cast aluminum pans as well as the wood bucks which he used to make the bodies for the cars.
The bodies were made from 12 to 14 layers of cheesecloth which were stretched tightly over the wood buck and were then saturated with wallpaper paste. After the wallpaper paste had dried, the edges were trimmed and the tops were spray painted.
Gus Yonaites and several of the tether cars which he had built were featured in an article in the February 17, 1955 edition of the "Chicago Daily Tribune" newspaper.