Scat Cat
Produced by Pac-A-Lite Mfg. Co.
The Scat Cat was designed by Bob Snodgrass, an avid speed plane and tether car racer.  The .19-size Scat Cat was initially offered with a drawn aluminum top, which was soon replaced with a cast aluminum top.  Early versions of the Scat Cat had bridle brackets cast into the pan, while later versions used bolt-on pan handles.  The car sold for $18.95 including a fuel tank but less engine.  The Scat Cat was the first truly competitive mass-produced racing mite and it dominated the .19-size class when first introduced.
Following on the success of the .19-size Scat Cat, Snodgrass produced a larger version of the car for .29-size engines.  Initially sold with a heavy cast aluminum top styled after that of the .19-size Scat Cat, most owners replaced the aluminum top on the .29-size Scat Cat with a lighter carved wood top.  The .29-size Scat Cat sold for $24.95 including a fuel tank but less engine.  The price was reduced by $2.50 if the buyer did not purchase the cast aluminum top.
Pac-A-Lite also produced a much smaller racing mite called the Scat-Cat-O-Car, which Snodgrass referred to as the "O-Car".  The O-Car was designed to accommodate engines ranging from .049 to .074 cubic inches.  Both the top and pan were lightweight stamped aluminum and the car utilized direct drive.  The O-Car kit sold for $3.95 less engine. 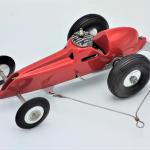 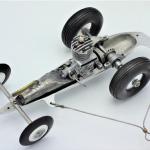 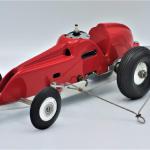 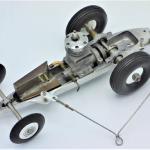 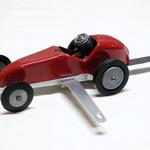 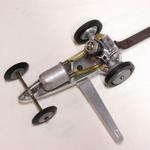