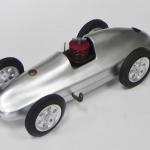 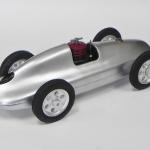 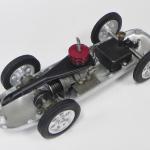 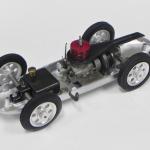 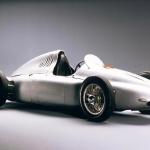 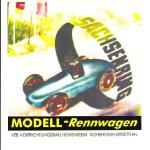 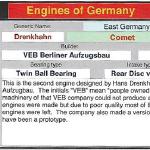 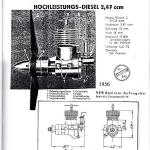 The car shown in the photos is an East German race car called a Sachsenring Modell Rennwagen. The car was modeled after the Porsche 360 Cisitalia grand prix racing car, designed for Cisitalia by Porsche in 1946 but, because of financial limitations, not actually built by Cisitalia until 1949.
The car is unique because both halves of the body and the wheels are made of Bakelite. The car was designed to be powered by an East German 2.5 cc Comet diesel engine and utilizes friction drive to power the rear wheels.
The 2.5 cc Comet diesel engine was designed by Hans Drenkhahn of Berlin but was produced around 1956 by the East German “people owned company” VEB Berliner Aufzugbau.
At the time when the engine was produced, East Germany was under communist rule and manufacturing facilities were required to devote a fixed percentage of their production output to sport- or hobby-related products. As a result, even though VEB Berliner Aufzugbau’s primary business was the manufacture of elevators and escalators, the government required that they also produce some sport- or hobby-related products.
In this case, VEB Berliner Aufzugbau also produced model engines, even though they were not well-prepared to do so. It has been estimated that about 12,000 of the Comet engines were produced, but due to poor quality, most of them were scrapped and only about 5,200 of the engines were ultimately made available for purchase.