Hawthan Mite  (Australia)
Designed, built and raced by Claude Hawthan
Both of these cars were designed, built and raced by Claude Hawthan of Tasmania, Australia.  A self-taught master craftsman and model builder, Hawthan built and raced a small number of tether cars of his own design beginning in the late 1940s and 1950s.  Each car was extremely well engineered and superbly built and his cars were as successful on the race track as they were aesthetically appealing.
The car shown at the top of the photos is accurately patterned after a post-World War II midget race car and features a cast aluminum pan, for which Hawthan constructed the pattern, and a hand formed sheet aluminum top.  The fuel tank and drive train are well engineered and expertly crafted.  The car is powered by an OS Pet .099 engine.  The car has been well-raced, but the engine still has excellent compression and the running gear rolls over smoothly.
The body halves of the teardrop-shaped car shown toward the bottom are hand formed sheet aluminum.  The engine is a custom-built .19 cubic inch engine which is patterned after a McCoy .19 race car engine.  The engine case, cylinder head, and front and rear covers were all machined from billet aluminum.  Even though Hawthan stamped "McCoy .19" on the by-pass of the engine case, the engine is a one-off custom-built engine of his own design.  In typical teardrop fashion, the car features a spur gear drive unit powering the front wheels.  This car also has been well-raced and is in as-run condition. 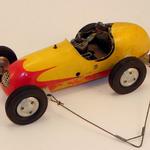 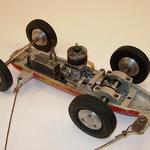 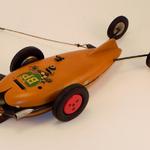 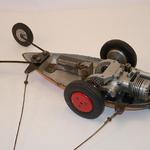 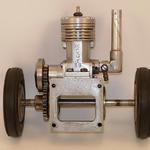