Oliver Tiger  (England)
Produced by JAO Precision Products
​The Oliver Tiger race car was produced by John A. Oliver and John S. Oliver (father and son) through their company JAO Precision Products in Nottingham, England.  The car was first introduced in kit form in 1950 and later was sold as a fully assembled and tested car in 1951.
The Oliver Tiger featured a cast aluminum body and was designed specifically to be powered by the Oliver Tiger 2.5 cc twin-shaft direct drive compression ignition engine which was an evolution of the earlier design Oliver Jaguar engine.  The use of a twin-shaft engine minimized frictional losses in the drive unit and also resulted in a very compact design car.
Oliver also produced several other variants of the original Tiger race car.  A business associate, Harry S. Howlett, whose firm produced the castings for Oliver cars and engines, was also a model race car enthusiast who built scale models of full-size race cars of that era.
A Howlett-designed Oliver car modeled after the 1938 Gran Prix Mercedes Benz is shown at the bottom of the photos.
Another variant of the original Oliver Tiger is also shown at the bottom of the photos.  The Oliver Tiger Bomb is a streamlined teardrop-shaped car in which the Oliver Tiger engine was moved forward to produce a front-drive race car. 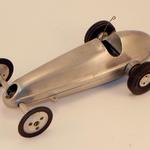 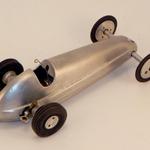 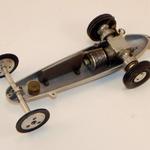 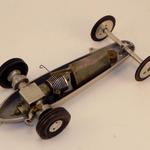 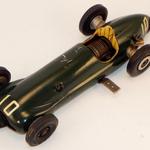 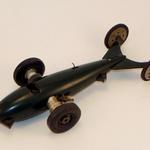